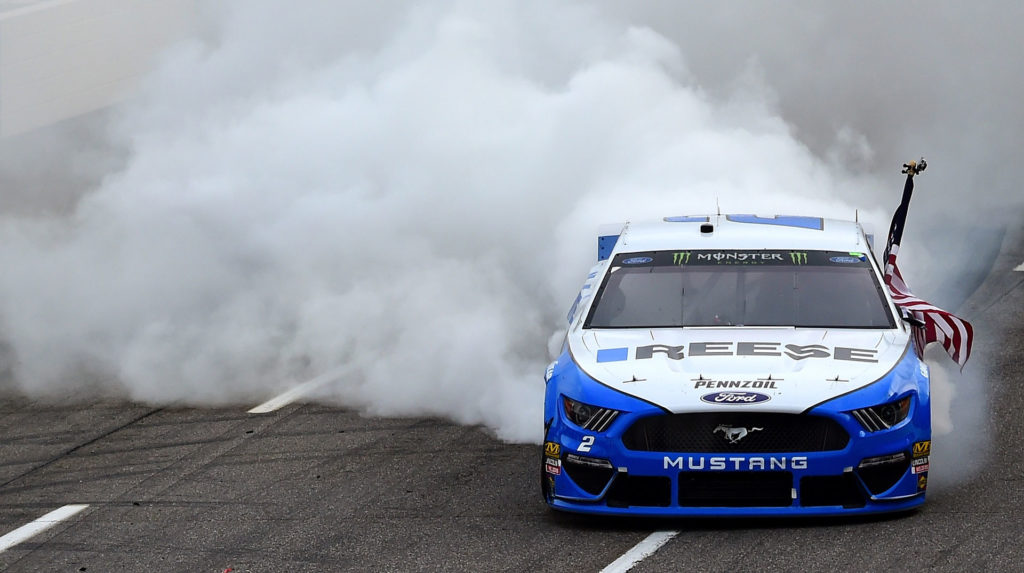 Brad Keselowski put on a show in the STP 500 at Martinsville Speedway, leading 446 of 500 laps in route to his second Monster Energy NASCAR Cup Series victory in the 2019 season, and second career win in Martinsville.

After taking the lead in the opening laps of the race from his teammate Joey Logano, the Penske Racing driver took the lead and didn’t look back, winning both stages and holding the first position throughout a majority of the 500 lap race. Chase Elliott found speed in the closing laps running the high line, but came up just short in his effort to take the lead, earning a second place finish for Hendrick Motorsports.

Kyle Busch, Ryan Blaney, and Denny Hamlin rounded out the Top 5. Kyle Busch saw his winning streak come to an end. The Joe Gibbs Racing driver was in contention and showed speed all race. However, the driver of the M&M’s Toyota Camry was never able to reach top spot. Busch’s victory in the NASCAR Gander Outdoors Truck Series put him at 201 total victories in the top three NASCAR touring series.

Chase Elliott was strong throughout the day, taking the lead from Keselowki with just over 100 laps remaining in the race. After losing two positions on pit road under caution, the Hendrick Motorsports driver was able to drive up to 2nd place and nearly take the lead away from Keselowski again in the final five laps. While a victory was not in store for the driver of the number 9 NAPA Chevy Camaro, Elliott was the only driver who was able to pass Keselowski at any point in the 500 lap race.

Keselowski’s victory in the STP 500 puts Penske Racing at three wins in the 2019 MENCS season, tying Joe Gibbs Racing. The two powerhouse racing teams have combined to win all six races early in the season. Stewart-Haas Racing’s winless streak extends another week as neither of the four teammates have earned a victory this season. The most notable of the four drivers is Kevin Harvick, who won a season high eight races in 2018.

Keselowski had a near-perfect fantasy NASCAR race, earning a total of 66 points, including 20 bonus points for winning the two stages, and three bonus points for leading the most laps. The driver of the number 2 Reese / Draw-Tite Ford Mustang scored 14 more points than any other driver, and was the top start of the STP 500. Blaney and Hamlin tied for third in fantasy points and were the top B class drivers, earning 48 points each.

G2fetterman earned the overall victory in fantasy with a total score of 164 points, beating StenhouseFan17 by one point in the STP 500 at Martinsville Speedway.

The Monster Energy NASCAR Cup Series moves on to Texas Motor Speedway next week for the O’Reilly Auto Parts 500. Last year Kyle Busch led 116 laps enroute to a victory at the one and a half mile racetrack. A new qualifying format is also expected to debut, after the debacle at Auto Club 400 where none of the 12 drivers made a lap in the final round. Will Busch get back to victory lane next Sunday, or will another driver earn a win in the Lone Star State? The O’Reilly Auto Parts 500 is set to kickoff at 3pm EDT next Sunday on Fox.