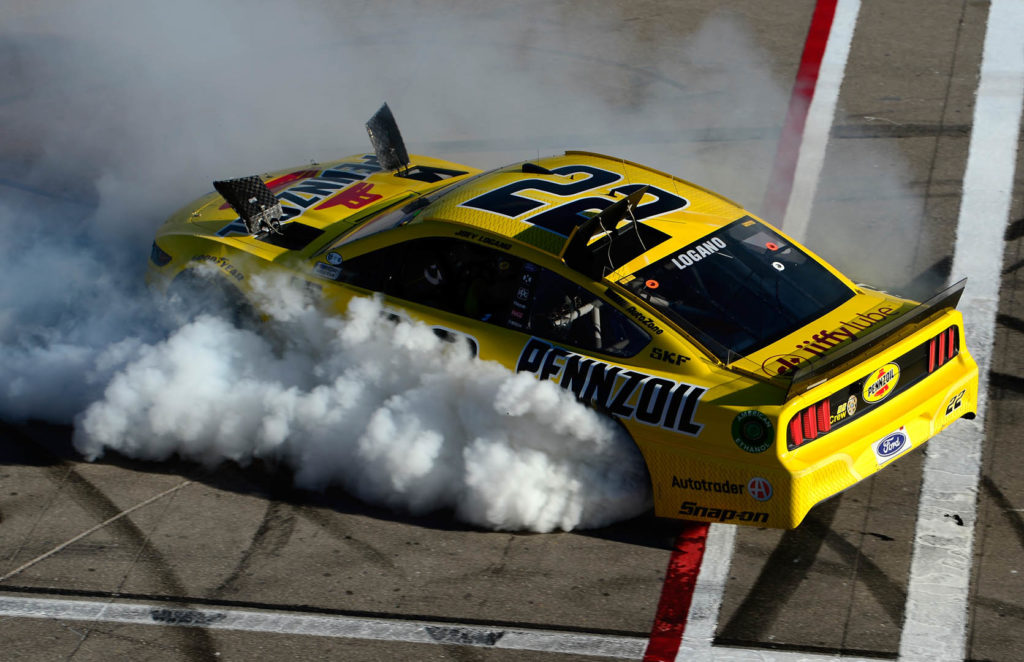 Joey Logano persevered late in the Pennzoil 400 at Las Vegas Motor Speedway, successfully holding off a late-race challenge from his Penske Racing teammate Brad Keselowski to earn the victory on the mile and a half racetrack in Las Vegas, Nevada.

The driver of the number 22 Pennzoil Ford Mustang held his steering wheel high in celebration, locking himself into the playoffs after the third race in the Monster Energy NASCAR Cup Series race of the season. Logano appears ready to defend his 2018 Championship, and will be in a position to run for the title once again later this season.

For a race with no cautions other than the end of the two stages, there was close racing throughout the field for the entirety of the Pennzoil 400 at Las Vegas Motor Speedway. Logano and Keselowski swapped the lead back and forth a number of times in the final laps, and the drivers nearly collided as they came out of Turn 4 on the final lap headed towards the checkered flag.

Kyle Busch and Kevin Harvick came within one second behind the two leaders, but fell just short in their effort to win the race. Kurt Busch rounded out the Top 5 in Sunday’s race.

Kyle Busch saw his bid for the Las Vegas sweep fall two positions short on Sunday after winning the NASCAR Gander Outdoors Truck Series race on Friday and the NASCAR Xfinity Series race on Saturday. The driver of the number 18 M&M’s Toyota Camry fought resiliently to overcome a speeding penalty early in the race, which mired him one lap down.

While others struggled once going to the back of the field, the Joe Gibbs Driver proved that it is possible to pass a lot of cars and drive from the back into the Top 5.

Harvick dominated the early portion of the race, leading a race-high 89 laps while winning Stage 1 and finishing 2nd in Stage 2. His racecar appeared to fall off just a bit in the closing stage of the race, allowing the two Penske drivers and Busch to pass the Stewart Haas Racing driver in the final laps.

Harvick was still the top driver to start in fantasy, earning 60 points, including his five points from qualifying on the pole, and three bonus points for leading the most laps.

While it wasn’t pack racing like many believed they would see on Sunday, the racing was competitive regardless of where cars were on the track. The drivers battled handling issues even with the high downforce, and were able to catch and pass each other without being stuck in dirty air.

After 267 laps with only two stage breaks, four drivers were all in contention as they reached the finish line. Maybe there’s still some work to be done with the 2019 rules package, but it was still promising to see great racing throughout the Pennzoil 400 at Las Vegas Motor Speedway.

Next week the Monster Energy NASCAR Cup Series continues the west coast swing at ISM Raceway in Phoenix, Arizona. Last year, Harvick earned the victory over Kyle Busch who led the most laps. With the old rules package in place for the one-mile racetrack in Phoenix, expect to see many familiar drivers race for the win in the desert next Sunday.