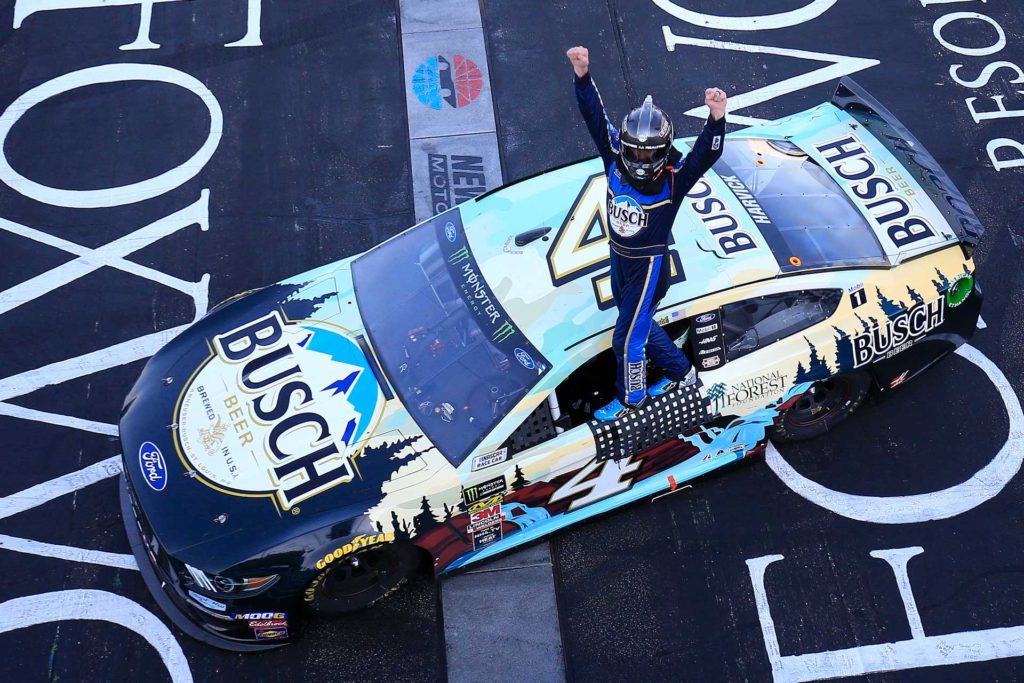 Kevin Harvick held off a hard-charging Denny Hamlin in the final laps to win the Foxwoods Resort Casino 301 at New Hampshire Motor Speedway.

Rodney Childers made the call to keep Harvick on the racetrack when the final caution flag came out on Lap 266, after an incident involving Kyle Larson brought pit strategy into play. Hamlin and others followed suit.

The 2014 Monster Energy NASCAR Cup Series Champion held his position until the final few laps when Hamlin nudged Harvick up the track on the final lap. As the two raced down the backstretch for the final time, Harvick, on the inside, bumped Hamlin through Turns 3 and 4 to secure the win coming to the checkered flag.

While both drivers initiated contact in the final mile, it was understood what it takes to win the race, and admitted they would’ve done the same given another opportunity.

“It’s been a minute,” said Harvick with a smile after climbing out of his car on the frontstretch to celebrate his victory. “He [Hamlin] tried to move me out of the way down there and I knew that was coming. He drove to the outside of me and I just put a wheel on him.”

After 20 races in the 2019 MENCS season, Kevin Harvick and Stewart-Haas Racing break through for their first win of the season in the Foxwoods Resort Casino 301 at New Hampshire Motor Speedway. Having eight wins only a year ago, expectations were set high entering the 2019 MENCS season for the No. 4 team, only to struggle finding victory lane through the first half of the schedule.

With four drivers and a team capable of winning multiple races at the top level, the first 19 races left many scratching their heads as to what was missing at SHR. Not only does a win minimize doubt and the amount of questions to answer, reaching victory lane also provides a needed boost in confidence for everyone within the organization.

“To finally battle and get over that hump is a great day for everybody at Stewart-Haas Racing and everybody on the 4 car,” said Harick in victory lane.

Denny Hamlin successfully chased down leader Kevin Harvick in the final laps to contend for the victory at the Magic Mile. As Harvick caught lap traffic, it allowed Hamlin to pull up on the rear bumper of the No. 4 car heading into Turn 1 on the final lap. Hamlin nudged Harvick up the race track enough to get to his inside. However, Hamlin admits he didn’t want to race Harvick dirty, and wanted the two drivers to race it out clean coming to the checkers.

“I didn’t want to completely screw him, I at least wanted to give him a fair shot,” Hamlin debriefed on pitroad after the race. “Once I had that big run, he just turned right, but I would do the same thing.” Then after thinking for a few moments, Hamlin admitted, “Shit, second sucks.”

The full results from the Foxwoods Resort Casino 301 is available here.