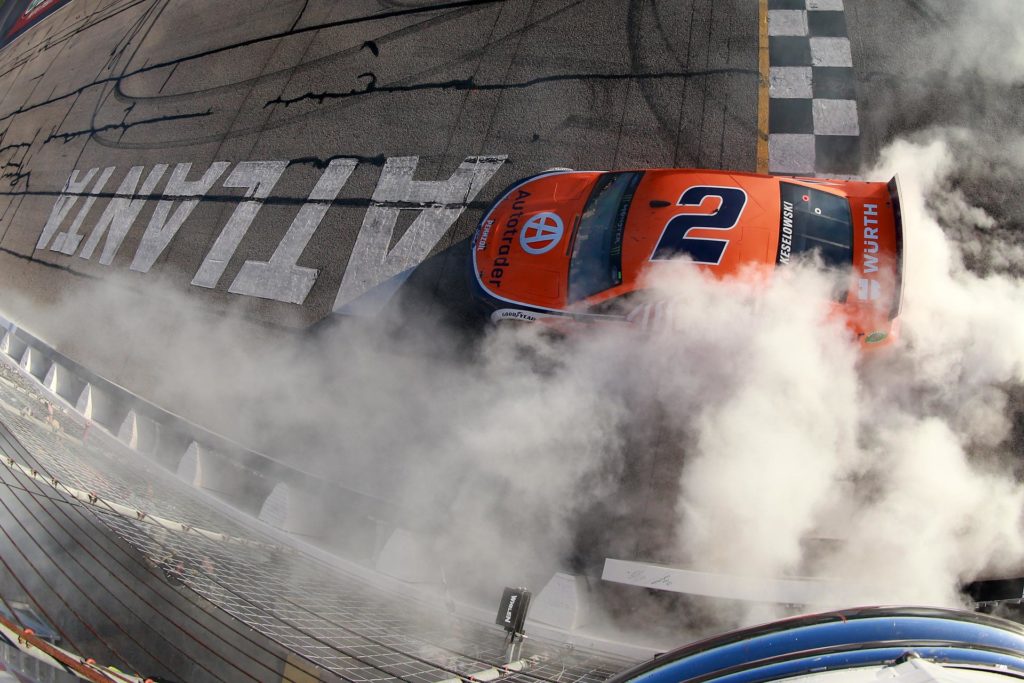 Brad Keselowski overcame obstacles in and out of the car throughout the Folds of Honor QuikTrip 500 weekend in a winning effort at Atlanta Motor Speedway. After battling flu-like symptoms on Saturday and relinquishing the car to Austin Cindric in final practice, Keselowski fought through 500 miles at the mile and a half racetrack in Hampton, Georgia to earn a victory in the second race of the Monster Energy NASCAR Cup Series season.

The driver of the #2 Autotrader Ford Mustang battled his way to the front of the field late in the race. After finishing outside the Top 10 in the first two stages, Keselowski took the lead late in the going, leading 33 laps while holding off a fast-approaching Martin Truex Jr. coming to the checkered flag. The 35 year old driver from Rochester Hills, Michigan earned his 28th career victory in his 343rd start in the MENCS.

While the win was Keselowski’s first of the season, it was also the first win for the 2019 Ford Mustang in the Cup Series.

While the Penske Racing team celebrated in victory lane, others were left wondering “what if,” after mistakes late in the going cost their team an opportunity for the win. Kyle Larson dominated a majority of the race early, winning the Stage 1 and finishing second in Stage 2, until a speeding penalty on pitroad mired him deep in the field late in the race after leading 142 laps.

In his second race in the #1 Chevy Camaro for Ganassi Racing, Kurt Busch made a statement, running in the Top 5 throughout the race and earning a third place finish. While neither Kyle Larson or Kurt Busch earned the win, the two-car team showed a lot of promise and have to be optimistic early in the 2019 season.

After crashing in final practice and starting in the rear of the field in a backup car, Kyle Busch worked his way towards the front. However, a flat right rear tire put the Joe Gibbs Racing driver out of contention for a victory. The 2015 MENCS Champion would still battle to a sixth place finish.

For everybody involved with NASCAR, this was a highly anticipated race weekend, as the new 2019 aero package made it’s a debut. The cars were visibly slower and bunched together in the early laps of a run. The restarted were intense as cars went three wide in an effort to gain as many spots early as possible. After the tires wore out, teams began to fall in line has they fought the handling on the racecars. Ryan Blaney commented on Twitter after the race, “This ain’t driving on I85. Drivers are on the ragged edge no matter what package.”

The complete 2019 rules package will be in full-effect next Sunday at Las Vegas Motor Speedway, when the aero ducts will be placed on the front of the racecar. Drivers and teams who tested at the track just weeks ago may have an early advantage heading into the weekend. There remains plenty of unknowns, only once the cars hit the track for the Pennzoil 400 will competitors and fans have an idea for what’s in store in Vegas.