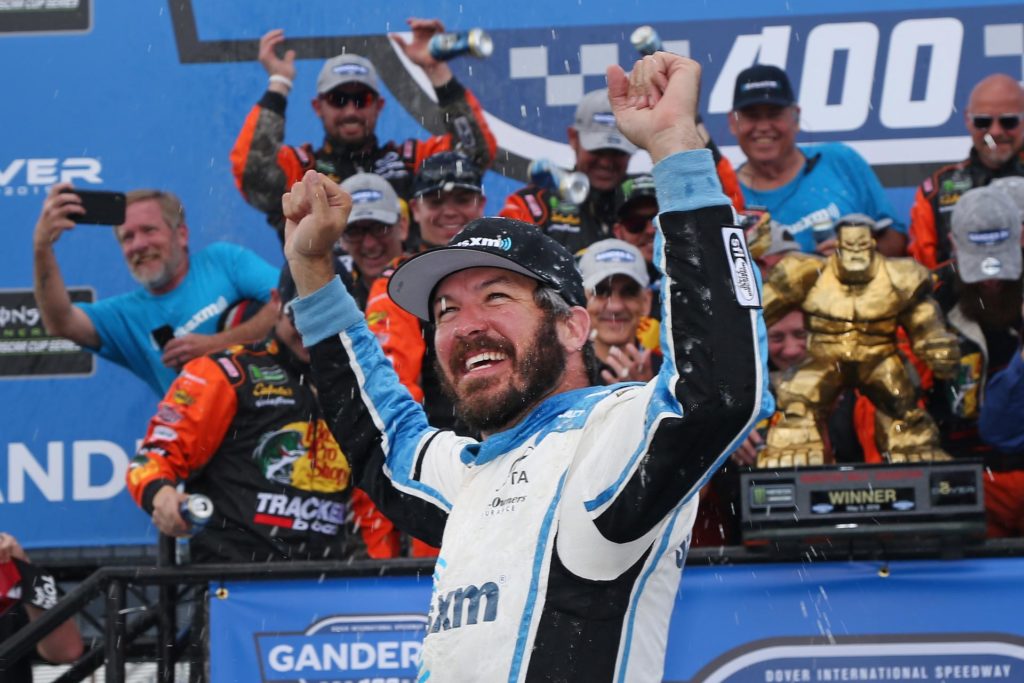 Martin Truex Jr. conquered the Monster Mile on his way to a victory in the Gander RV 400 at Dover International Speedway Monday afternoon. The Joe Gibbs Racing driver picked up his second victory of the 2019 Monster Energy NASCAR Cup Series at the one-mile racetrack in Dover, Delaware.

Dover International Speedway has been a great track for the driver from nearby Mayetta, NJ. Truex Jr. earned his first win at the Monster Mile back in 2007. On Monday, Truex Jr. led 132 laps and picked up the Stage 2 victory before taking the checkered flag in the Gander RV 400 after starting from the rear of the field due to an inspection issue.

“Just a big day for our team honestly,” said Truex Jr. after the race. “To have to start at the rear of the field at a track that’s really difficult to pass at and be able to work our way up to the front of the field all day long, and at the end kind of dominate was pretty awesome.”

Truex Jr. now has two wins in the last three races in his first season competing for Joe Gibbs Racing. His teammate Kyle Busch finished 10th, extending his Top 10 streak to 11 races to start the 2019 season.

After Chase Elliott picked up the win last week at Talladega, Hendrick Motorsports backed up the victory with a competitive performance from the three young teammates. Elliott earned the pole for the Gander RV 400 at Dover International Speedway, starting alongside his teammate William Byron, with Alex Bowman qualifying in the 5th position before having to start at the rear of the field.

While Truex Jr. won the race, the Hendrick Motorsports drivers contended up front and were competitive over the course of 400 miles. Elliott led a race-high 145 laps while finishing in the Top 5 in both stages before finishing 5th. Bowman earned a runner-up finish of 2nd place, and Byron came home 8th.

“It would be better if we had a trophy right? But we needed this for sure – To come here, in my opinion the hardest racetrack we go to and run like that from the back – was pretty special,” said Bowman after the race.

The 8️⃣8️⃣ keeps on rolling! @AlexBowman88 shares his thoughts after collecting another runner-up finish in 2019. pic.twitter.com/OBSZ1ITD5h

Fellow Chevy driver Kyle Larson earned his best finish of the season with a 3rd place result. “It was good to finally have a clean race, I don’t think we’ve had a clean weekend all year long,” said the Chip Ganassi Racing driver.

.@KyleLarsonRacin (P3) got the solid day he needed.

This is his eighth top-10 finish in 11 races at the @MonsterMile! pic.twitter.com/ogHCqSo3cy

Chevrolet now has a victory, a string of Top 5’s, and a lot of momentum to build on as the MENCS heads to Kansas Speedway for the Digital Ally 400 Saturday night.

Here are the complete results from the Gander RV 400 at Dover International Speedway.